Are you looking for a high-quality instrument with a unique sound?

Then you are in the right place here!

Each of my Nyckelharpas is an individually handmade piece with unique sound,

optimal weight and a keyboard that is characterized by wonderfully precise and smooth playability.

You can choose between two basic models.

I'll be very happy to welcome you in my workshop where you can try my instruments.

I'm looking forward to your visit! 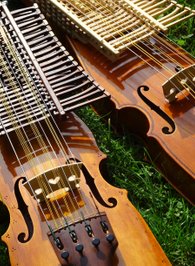 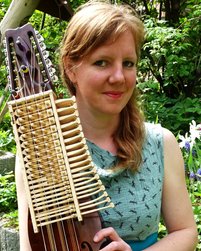 Since I've learned to play the violin at the age of 6, music has accompanied me throughout my whole life. As a schoolgirl, I've played in various orchestras, discovered my passion for folk music at the age of 16 and since then I 've played in a wide variety of ensembles from Irish folk to folk rock and Swedish folk, including bands like e.g. "Die Komödianskys", "Off Limits", "Lanky down Dilly" and "Lindelund". Currently, I'm touring with the band "Sväng - Scandinavian Folk Trio".

In spring 20I2, I successfully completed my training as a luthier at the violin making school in Mittenwald, Germany and in the same year I began playing and building nyckelharpas, which have fascinated me ever since my childhood.

I have worked in various violin making workshops, including the Holfter GmbH  in Stolberg and the Peter Schlarb - workshop in Aachen. I've also worked for the nyckelharpa maker Annette Osann in Dole (France) from 2013 to 2017, and have been building nyckelharpas from my own models in my own workshop since 2013. Both, the collaboration with Annette Osann and the close exchange with professional nyckelharpa players have influenced my instruments and made them what they are today.

"When Amrey handed me my instrument, the wonderfully sonorous sound immediately captivated me and still does. When I start playing, it is extremely difficult for me to put it down again. The keyboard can be played so elegantly, precisely and fluently, just as if you were stroking it. Absolutely fascinating!"

"Amrey Schaffeld is experimental and innovative: with each new nyckelharpa she goes one step further. Her extremely precisely crafted instruments are characterised by excellent playability and a tone that is as powerful as it is warm."

I build two different nyckelharpa models, which differ mainly in sound, choice of materials and construction. The colour and e.g. the shape of the head can vary regarding the customer's wishes. The development of my keyboard was inspired by the ideas of professional nyckelharpa players. This resulted in a keyboard that is optimally adapted to the needs of the player. Trills, glissando and fast runs are very easy playable on it. The fine tuners are integrated in the tailpiece. This allows easy and precise tuning and saves weight.

This nyckelharpa has curved maple sides, maple back and western red cedar top with purfling and maple veneer head.

The sound is very fine and precise in modulation, in total warm and full.

In baroque music and early music the model "Joie" has already found many friends. It fits well into ensembles and is equally convincing as a solo instrument.

Number of keys on the keyboard:

This nyckelharpa has a body of spruce with sawn sides, as it is also common with traditional Swedish instruments.

The sound is therefore clear, direct and assertive, as well as full and sonorous in the lows.

The instrument is a good "all-rounder", well suited for folk as well as other music genres.

Number of keys on the keyboard:

Visit me at exhibitions, at music workshops or at festivals. Looking forward to meeting you there!

In the process of planning

A LOOK INTO MY WORKSHOP

Here are some impressions of my work.

My Band in Regensburg (Germany)